This is the simplified version of Schumacher's Multilateral Clearing which was used by Keynes for his International Clearing Union and Bancor proposal in Bretton Woods, which were not accepted as they would regulate world trade. We build on Keynes' ideas and merge them with those of Adam Smith to create a social multilateral free trade system which is based on gold or grains, as part of social resource allocation system. grain values  of products and commodities.

Assume that there is only the US, Britain and Poland

How can multilateral clearing be achieved without the application of force? 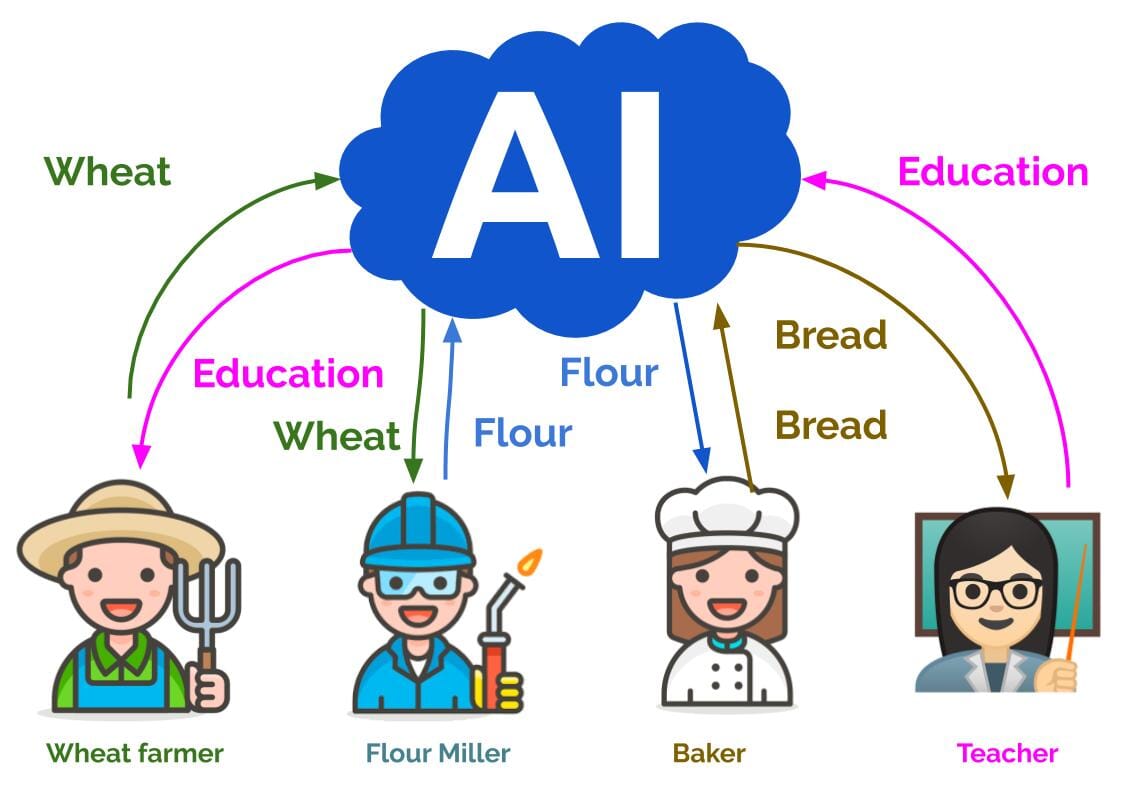 This paragraph merely states the theoretical principle of Pool Clearing.

Assume this goes on for 12 months and each Fund has 3 outcomes:

What would be the position of ownership of the deficit countries?

But what if there are more than three countries?

They belong to whom?

The pooling of balances arises automatically out of the system's mechanism.

The International Clearing Office requires no finance of its own.

It would be of no economic significance if a new international currency were created.

The Clearing Funds of surplus countries become indebted to their internal money markets and acquire an equivalent share in the Pool, both their debt and their share in the Pool being equal to their trade surplus.

This system is fully multilateral.

They have the same technical effect.

Under Pool Clearing, these differential stimuli do not exist

This is a great advantage, because:

A trading system that enforces strict bilateralism is arbitrary and discriminatory.

Under a regime of bilateral clearings, each country has free access to the trade and raw materials of those other countries which are its customers.

How would Pool Clearing affect those more fundamental real factors?

Whenever a National Clearing Fund receives payment from a resident at home who wishes to discharge a debt abroad:

In this way, each country gives to each other country an overdraft facility for foreign payments.

How should these facilities be quantitatively determined?

These two methods are the same in the sense that they lead to a stoppage (or rationing) of deliveries to the overdrawn country.

The first method of limitation makes it quite clear to each participant country what is its maximum stake in the Pool.

The actual determination of these upper limits is not difficult

It is not suggested that there should he a new overdraft every year.

Assume, then, that appropriate limits have been fixed for the deficit any one country will be allowed to incur, and the system is put into operation.

What forces operate within the system to facilitate this task?

In contradistinction to a bilateral set-up, however, Pool Clearing gives to each country the fullest opportunities to avoid becoming a surplus country:

Such failures can occur.

Under Pool Clearing a similar trend would undoubtedly assert itself, if the participating states failed to achieve a constant high level of employment at home.

It might be said that any discouragement of surpluses will lead nations to ration their exports rather than expand their purchases.

The aim must be to achieve balance in the trade of every nation.5 Such balance can be most easily achieved if potential surplus countries are discouraged from achieving a surplus.

It may therefore not be rash to assume that Pool Clearing would exert a considerable influence upon the surplus countries to try and avoid all the risks involved in holding a share in the Pool by adopting any such measures as will increase the activities of their importers.

In this case, the system, as far as the trade of the “overdrawn ” country is concerned, would probably degenerate into some form of Bilateralism.

In a situation of this kind there are, roughly speaking, three ways of escape that might recommend themselves:

How, then, could the “exception”, i.e. capital movements for the purpose of industrialising backward areas, be worked into the system of Pool Clearing?

There appear to be two ways in which this problem could be handled.

An arrangement of this sort would have the advantage of making the processes of international capital movements far more conscious and more easily recognisable than they have been hitherto.

Whichever of these two alternatives is chosen, the effect will be that in a formal sense the debtor country will always be able to discharge the legal obligations which arise out of its indebtedness.

This arrangement would show quite clearly the essential nature of international capital movements.

(2) We now come to the second way in which an adjustment might be sought when a country appears to be unable to sell enough to pay for its purchases: devaluation.

Under Pool Clearing, the determination of the rates of exchange comes from the cooperation of the different National Clearing Funds.

Is it likely that such international agreement on exchange rates will be obtained?

Assuming, then, that each country accepts the duty of keeping its own Clearing Fund in balance, and grants the right to every other country to choose any such means as will serve this purpose in their own case, there should be some international agency which will provide the machinery for reaching common decisions.

Our choice in this matter is not very wide.

All economic phenomena, in an era of quick transportation and intensive economic exchange, are interconnected.

This, of course, would have far-reaching effects also upon purely internal policies in the different countries.

(3) In some cases the degree of devaluation necessary for “balance” may be such that vital interests of the country in question will be endangered.

At the start of this essay we accepted that certain advantages could be gained by employing the clearing principle for international trade.

This inner expansionist force of the system is its most important feature. The isolation of trade movements from speculative capital movements, which this system brings about, can be attained also by other means.

Whether the efforts required for the establishment of such a system are worth while, and whether the risks inherent in any new departures can prudently be taken—-that can be decided only by considering the available alternatives.

Economic regionalism might be considered superior to the anarchy of rigid Bilateralism.