Over the past three years, I've looked for a name for our proposed economic science which is directly descended from Adam Smith's The Wealth of Nations and David Hume's A Treatise of Human Nature.   Since it is an economic science for a social system, the name 'Socionomics' becomes an easy candidate, combining 'society' + 'nomics' (management, law), implying the management of society. However, the word has already been taken.   So while I couldn't think of any better alternatives, I gave it  temporary names like 'Socioeconomics' and 'Smithonomics'.

Economics is the study of how men end up choosing, with or without money, to employ scarce resources, and of how to improve resource allocation.

In the simplest sense, Economics is a science of resource allocation, which is consistent with the words 'budgeting' and 'economizing'. Therefore, whatever name for this new thing needed to have RA or 'resource allocation' in it. In the beginning I thought of Non-Arbitrary Resource Allocation or NARA since I was applying for a research scholarship to Japan (Nara was one of its ancient capitals). I dropped the name after my research application was denied.

This morning while brushing my teeth, I thought of 'SORAnomics which combines 'social resource allocation' + 'nomics' or the management of resource allocation in a society. In addition, this name is new and unique, yet contains the ideas in Smith and Hume's works. More importantly, it views resource allocation from the perspective of society instead of the self as what Economics and the business sciences currently do.

While Economics, specifically Microeconomics, focuses on the prosperity of the self, SORAnomics focuses on the prosperity (and survival) of human societies. In addition, 'sora' means 'sky' in Japanese (This whole thing came from my research proposal to a scholarship program to Japan which was unsuccessful). This name implies that there are no limits in the creativity and imagination for sustaining a happy physical existence. The vastness of the sky frees people from the limitations or gravity created by the commercial or mercantile system which Smith was so much against -- specifically the idea that money = wealth.

SORA means sky which can imply freedom and expansion. This is in contrast to the commercial or 'economic' system which focuses on numbers, money, and objects which have a limiting or crudifying effect on the mind.

For example, in the current economic or commercial system, you can't do anything without money because money is the basis of exchange. You could borrow money as a monetary credit, but this would burden you with interest rates and inflation.

But through Social Resource Allocation (SORA), you could do exchanges using barter and resource credits, freeing you from the reliance on money. Since money is represented by numbers and since money is not essential to SORA, people will no longer be chasing after numbers or objects. Instead, they will go for each other and whatever purpose they've set out to accomplish, bringing about real 'economic' democracy and a natural emphasis on morality, both of which are lacking in the current economic and commercial systems.

In other words, while 'Economic' systems are driven by numbers and money, 'SORAnomic' systems are driven by information and moral sentiments. This then explains why Smith viewed his Theory of Moral Sentiments as superior to The Wealth of Nations. However, the main mistake that Smith made was to focus on the theoretical aspects of his works on morals and wealth, instead of implementing them on the real world. Economists like JB Say and Irving Fisher, on the contrary, implemented their ideas in the business world, allowing them to be proven or disproven. Smith did not seem to start any business or organization, other than The Select Society, which did not push his ideas. 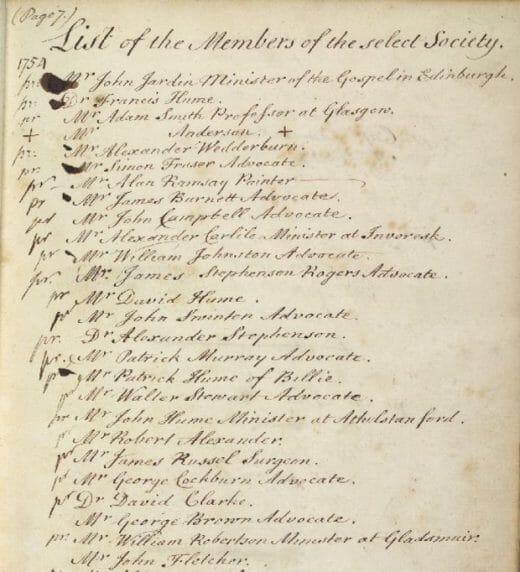 The Select Society in Scotland did not last long

The problem with this is that future generations could simply write their own books to refute Smith's ideas after he was gone. His profound theories were never implemented and were easily disregarded by later generations. Had Smith formed a free trade organization to embody his ideas, with its own physical building and people, then his work could've withstood the sophistry of later economists who were deceived by utility as to enshrine the belief that money = wealth.

To avoid Smith's shortcomings, I am doing a lot of effort to establish the new system, on top of reviving Smith's theories. Thankfully, open source technologies and online publishing are available nowadays to make it possible to establish both -- cloud computing allows the SORA system, while Google Books and Amazon allow books to be published, saving a lot of effort that would've been wasted in trying to get a research grant or get it published through a university or publisher.

After three years or so of developing the data models, I figured out that best way to sustain the system through time is through an artificial intelligence which I call ISAIAH.  A human organization is subject to social cycles and can live or die, but an artificial intelligence is a non-living code, that can last indefinitely. For example, Yahoo, Google, and Facebook can easily outlive their founders and investors.