Summary: We define Capitalism as an economic system that uses outside ownership to amass private profits.

A major topic of debate among economists is whether Adam Smith was a proponent of capitalism.

We argue that he was not, simply because his core ideas are very different from those of capitalism, which is merely mercantilism with slight or superficial changes. The source of the confusion is the unclear definition of the word 'capitalism'. The most concise definition  is:

An economic system based on the private ownership of capital to produce goods and services for profit.

Based on this defintion, can we conclusively answer if the following are capitalist?

We remove the capital, production, goods & services, as they are common to every economic system. How else can goods & services exist other than by production through capital? Thus, private ownership and profit remain as the noteworthy basic ideas possibly unique to capitalism.

Private ownership alone cannot be capitalism's defining characteristic since feudal lands and even a whole country like North Korea can be said to be under private ownership of their ruling class, yet are still able to produce goods. This leaves us with profit or the profit motive as its possible defining characteristic. This is strengthened by the fact that the ruling class usually lives by rent or taxes and not by profits.

The ruling class that taxed the people usually descended from Warrior Kings, like the Yuan and Mughals.

However, the problem with this is that the profit motive also defines mercantilism. Merchants in the 18th century lobbied for tariffs, exclusive privileges, and subsidies in order to get higher profits. Thus, those absurd regulations associated with mercantilism were merely the effects, and the profit motive was the cause. They set up mercantile companies to profit from the production of tea and opium in India, just as Apple funded factories in China to produce iPhones, to take advantage of price differences. Then and now, this profiteering can only be done through big business organizations.

In Book 5 of The Wealth of Nations, corporations or firms were known as joint stock companies which were big business organizations that ran on the same basic ideas:

This sameness of essence between capitalism and mercantilism is proven by the fact that Capitalism's producers and Mercantilism's merchants actually form a single sub-order of society which live or maintain their existence by profits:

But different words exist only to express different ideas. Even if the basic idea of capitalism and mercantilism are the same, there must have been a secondary basic idea to differentiate their expression, otherwise, they could've been used interchangeably, just as the words 'automobile' and 'car' can mean the exact same thing. To find this secondary idea, we retrace our steps back to 'private ownership' to see if there is any difference in the idea of private ownership in mercantilism and private ownership in capitalism.

The object of most of the bylaws of all regulated companies and all other corporations, is not so much to oppress existing members. Its object is more to discourage others from becoming members... The directors of a regulated company, have no common capital to manage. They have no other fund to use for forts and garrisons other than the casual revenue from: the admission fines, the corporation duties

Thus, in terms of the difference between private ownership in mercantilism and in capitalism, the former limits private outside ownership in big, for-profit organizations (leaving it with a smaller capital) but the latter allows it too much (as equity or stocks leading to bigger capital). This looseness and freedom of ownership leads to big capital by allowing a lot of resources to be pooled. Thus, we say that 'equity' is the causeof a very obvious effectof big capital, which we speculate to have led to its naming as 'capitalism'.

Let's compare our definition with the historical definition.

Capitalism's birth in England and/or France can be narrowed down to after Smith's death in 1790 to before 1830 when its idea was already written about, as explained by Marx:

Gustav von Gülich in his "Historical description of Commerce, Industry,"..in 1830, has examined at length the historical circumstances that prevented, in Germany, the development of the capitalistmode of production.. Thus the soil whence Political Economy springs was wanting. This "science" had to be imported from England and Franceas a ready-made article.. Since 1848 capitalist production has developed rapidly in Germany, and at the present time it is in the full bloom of speculation and swindling.

Incidentally, this period is also when JB Say, a French businessman and our proto-capitalist, published A Treatise on Political Economy (1803), which has all the basic 'seed' ideas for the current idea of capitalism. However, the single idea that sparked the growth or served as the genesis of the modern version of capitalism is the definition by James Mill in Elements of Political Economy (1821) as someone who owns the produce of the work of others, without actually working himself:

In this sense of the term "owners of labour," the parties, concerned about production, are divided into two classes, that of capitalists, the rich men who supply the materials and instruments of production; and that of the workmen, who supply the labour.

James Mill (1773-1836), creator of modern capitalism, was a friend of Jeremy Bentham, a liberal

Note that in this sense, capitalist can only apply if the workers are ACTUALLY SLAVES:

The great capitalist..if he operated with slavesinstead of free labourers..would be regarded as owner both of the capital, and of the labour.

However, Mill makes the hugely erroneous but not obvious assumption that the workers of today are equal to slaves:

What is the difference, in the case of the man, who operates by means of labourers receiving wages? The labourer, who receives wages, sells his labour for a day, a week, a month, or a year.. The manufacturer, who pays these wages, buys the labour, for the day, the year.. He is equally therefore the owner of the labour, with the manufacturer who operates with slaves. The only difference is, in the mode of purchasing. The owner of the slave purchases, at once, the whole of the labour, which the man can ever perform: he, who pays wages, purchases only so much of a man's labour as he can perform in a day, or any other stipulated time. Being equally, however, the owner of the labour, so purchased, as the owner of the slave is of that of the slave, the produce, which is the result of this labour, combined with his capital, is all equally his own. In the state of society, in which we at present exist, it is in these circumstances that almost all production is effected: the capitalist is the owner of both instruments of production: and the whole of the produce is his.

Thus, in modern capitalism (Mill's capitalism), workers are actually slaves in essence, different from the capitalism of Turgot, Say, and Ricardo. Ask any employee if he feels like a slave to his boss nowadays and he will likely reply yes. It was Mill that corrupted the word 'capitalist', equating it more to 'slave driver' instead of the proper classical definition of 'someone who lives by profits,' as used by Smith and the Physiocrats. Thus:

So we can say this idea of Mill destroyed the socio-economic freedom espoused by Smith, which gave importance to wage earners, profit earners, and rent earners. This destruction, in turn, became fuel for Marx, attacking Mill's ideas which were by then more fully developed by his son John Stuart Mill: 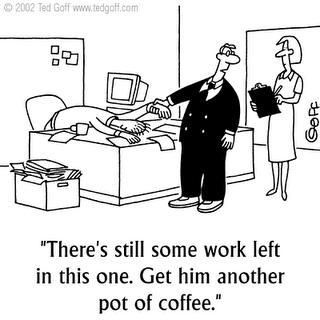 Men who still claimed some scientific standing and aspired to be something more than mere sophists and sycophants of the ruling classes tried to harmonise the Political Economy of capital with the claims..of the proletariat. Hence a shallow syncretism of which John Stuart Mill is the best representative. Under these circumstances its professors fell into two groups. The one set, prudent, practical business folk, flocked to the banner of Bastiat, the most superficial and therefore the most adequate representative of the apologetic of vulgar economy; the other, proud of the professorial dignity of their science, followed John Stuart Mill in his attempt to reconcile irreconcilables.*

Marx' main description of capitalism as a system where resources are amassed through centralization for private gain is consistent with our definition of a system of pooling resources together through equity, or shares of stocks:

Capital grows in one place to a huge mass in a single hand, because it has in another place been lost by many. This is centralisation proper, as distinct from accumulation and concentration. ..accumulation..is a very slow process as compared with centralisation.. The world would still be without railroads, if it had been obliged to wait until accumulation.. enabled a few individual capitals to undertake the construction of a railroad. Centralisation, on the other hand, accomplished this by a turn of the hand through stock companies.

Nowadays, almost anyone can own stocks and some people, like pensioners and insurance buyers, don't even know that they are indirectly owning stocks, and are in effect getting a steady revenue from the work of others without working themselves. More obviously, the most common buzz in today's business news are stock prices, proving the importance of equity to capitalism. Turn on CNBC and Bloomberg and you will see stock information everywhere. If the world had stayed in mercantilism, then commodity prices would be shown instead.

The Basic SORAnomic Definition of Capitalism

With these ideas of centralization, private gain, and the ownership of other people's work, we can thus define capitalism very basically as an economic system that uses outside ownership to amass private profits.

It is through the ownership of stock by people outside or unrelated to the company's operations that they get rich through the accumulation of profits via retained earnings and rising stock prices. By simply making the right bet, a stock trader or investor can suddenly multiply his small money or nominal value into big money, or his weak command of other people's labor into a more powerful command, with far less effort or labor himself. This is one of the main expedients that fuels inequality, as it allows people to feed off the work of others legally and is the root of economic injustice. When left unchecked, it destroys societies via bubbles (when people try to increase their nominal value way above their real value) which lead to recessions or depressions, best seen after 1929 when nominal value crashes back to its real value.

This definition distinguishes it from mercantilism and answers the earlier questions:

By defining capitalism, we can better filter out the economic policies that enslave people and we can adopt those that set them free. The next task is to define outside equity, which will be discussed in future posts.