An important feature of Smith's Political Economy (and the science of SORAnomics which we created from it) is the classification ofall revenue into either rent, wages, and profit.

Such classification is not so important to Economics which focuses on the quantity or dollar value of revenue instead of its quality. I found that this classification is difficult nowadays when other kinds of revenue have been introduced, such as interest income, different kinds of taxes, royalties, revenue from membership fees, etc. Smith did not give a clear system of classifying revenues. He just said that some kinds of revenue can be confounded with others, and gave examples of them.

It's necessary to define the essence of those three revenues to make classification easier so that, in theory, we can put the entire economic system under the management of an impartial spectatorArtificial Intelligence (AI) which will not have vested interests nor be greedy as the current managers of capitalist or communist systems. The AI would be able to classify each person and then micromanage economic policies in real time to prevent that person or any class of persons from being economically neglected. This would fix the distribution of wealth so that there would no longer be extreme poverty, financial crises, recessions, or even conflicts.

Below are the most basic definitions or essence of each kind of revenue to aid in classifying other revenues. I have added a fourth and final kind of revenue called 'Donations' in order to complete Smith's system and integrate it seamlessly with the Easternvarnashrama system  as shudras (workers), ksattriyas (rulers), brahmins (intellectuals), and vaesyas (merchants) which are equivalent to Socrates' democrats, tyrants, aristocrats, and oligarchs. 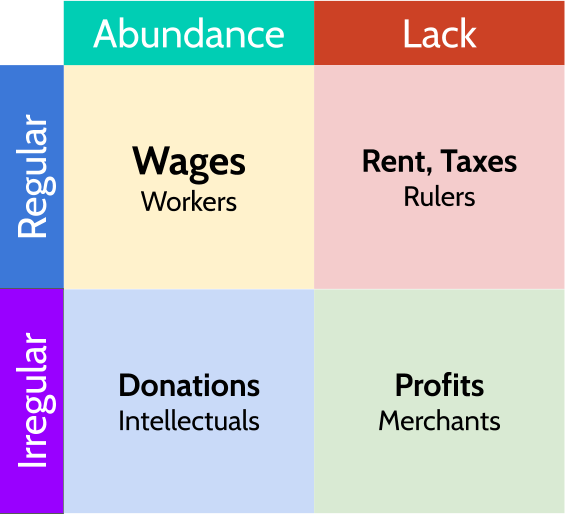 The rent of land is naturally a monopoly price.

A landlord can charge rent for his land because he or his forefathers were able to own or conquer that land. You have no choice but to pay rent if you want to use his land. This lack of choice is in turn caused by the fact that humans have no choice but tolive on landinstead of the water or air. The same idea is true withtaxes -- the government or ruling party can charge taxes because they were able to gain power in the country -- you have no choice but to pay taxes, because you must live under some form of civilized society. In Eastern metaphysics, we can say that rent is usually the revenue of thewarrior class orksatriyas.

WagesRegular Revenue to Live, from the Abundance Experienced by Employers

Wages are therevenue needed to maintain oneself and whatever else is important to one's life (such as one's family). Having high wages therefore means having more ability to live life, as compared to a low wage person who islimited in life.Labor or work is the main activity required to live. You need to work to find something to eat which in turn is needed to stay alive.

According to Cantillon, the lowest labourer must earn at least double his own maintenance so that he can bring up two children with the help of his wife.

Aslave does not earn wages becausehis life does not belong to himself. Instead, his ability to live is determined by his master, just like a machine. We do not say that a machine's gasoline is part of its revenue. In Eastern metaphysics, we can say that wages are usually the revenue of the masses as theworker class orshudras.

Profits are the revenue arising from the external lack experienced by other people, whether as lack of knowledge or cognition, or lack of goods or commodities. We definecommodities asanything that can be traded, whether physical or non-physical such as information. In fact,information can be commoditized  in our system.

A shortage of anything that is in demand will naturally cause high prices and high profits for its seller. For example, food suppliers have high profits during famines.This nature of profits is why the interests of those-who-live-by-profits (capitalists and merchants) are often opposite that of society -- because society does not want external lack, but merchants and capitalists do, since they gain from that lack. If the world were filled with iPhone manufacturers, there would be no lack of iPhones and their prices would drop. Thus, it is the shallow interest of the iPhone inventor to prevent the spread of knowledge of how to make it, through a monopolistic system calledintellectual property.

If a con-man sold you an ordinary rock for $1,000 saying it came from Mars, and you actually bought it, then he would have gained revenue from yourlack of knowledge. Likewise, a person can sell you valuable information for a high price, which would then be deemed as his profits, and not as wages nor rent, since it was a one-off deal. If his supply of information were regular, along with his customers, then his revenue gets the same nature as wages, with his customers acting as his employers.

Profits can be confounded with wages in other ways. For example, a salesman might earn a fixed wage plus a 5% commission for anything he sells. In his case, his commission is a profit. But since he lives off of his wages more, then we can say that he lives by wages.

Workers generally overwork themselves when liberally paid by the piece and ruin their health in a few years.. The same thing happens in other trades where the workers are paid by the piece wherever wages are higher than ordinary.

To Smith,ordinary profits, or thelowest possible nominal profits, are the best for society. With this definition, ordinary profits would mean thatthere is little lack in society. This state could only happen if there were many suppliers competing in an effort to reduce that lack. Since human desires are dynamic (you never want to eat just one food for a year, or just buy one shirt annually),lack is always created in the mind, which Smith callsabsolute demand, a concept not present in modern Economics. This demand or desire, and not money, is the true engine for rent, wages, and profit as seen in our main formula:

Interest is a revenue classified under profits and is the revenue from letting others use your money. If you use your money yourself, then the revenue is called profit. In Eastern metaphysics, we can say that profits are usually the revenue of themerchant or oligarch class orvaishyas.

The prophet Mohammad was a merchant and he knew the tendency of the oligarch class to destroy society by profiteering (feeding off of them by profits), so he simply banned profiteering. This is similar how Socrates warned against excessive wealth in The Republic. By banning interest, Islamic banking converts profits into rent, taking power away from the merchant class and putting it into the landlord class, naturally leading to dictatorships in Islamic countries. The Western mind then sees this oppressive dictatorship and removes it in order to free the people, not knowing that it is the very glue that keeps their economy and society whole. In contrast, Westerners are oppressed by their businessmen who turn them into mindless consumers. Getting rid of their businessmen would also cause Western society to unglue itself, and so they strongly protect business interests.

But there are two causes of the deterioration of the arts: Wealth and Poverty. When a potter becomes rich he will not think of you as much as before and grow more and more indolent and careless.. Here, then, is a discovery of new evils of wealth and poverty, against which the guardians will have to watch, or they will creep into the city unobserved.

DonationsIrregular Revenue from the abundance experienced by others

Donations are revenue similar to profits but are caused by anabundance instead of a lack. It is associated with theintellectual class which includes clergy, scientists, and teachers. An example is the non-fixed 'honorary' that a student gives to his preferred teacher directly which would then encourage the teacher to continue teaching. Another example is the donations box given during Christian mass to give revenue to the priest for him to be able to continue his work. The priest's command over the people is purely metaphysical and not physical like the warrior-king, nor commercial like the merchant-oligarch. Thus in Eastern metaphysics, we can say that donations are usually the revenue of theintellectual class orbrahmin (the head of the body).

The fee or honorary which the scholar pays the teacher is naturally a revenue of this kind.

By organizing the four revenues, it becomes easier to see why negativity is attached to taxes and profits, different from wages and donations which are seen positively by society. On the flipside, high profits and taxes are essential to driving productivity (since they come from a 'lacking' starting point), whereas high wages and donations do not give the same guarantee (since they are already abundant).

The pre-classification of revenue into four qualities is an example ofSocrates' Dialectical* methodwhich compares observable data (in our case, the data is revenue) with timeless principles (here, it is the four social classes that have been observed both in the East and West).

*The Dialectics of Socrates is different from that of Hegel or Engels. The former is totally based on metaphysical truths, such as the existence of a Deity which sets the principles for everything in existence, while the latter is based on the movement of the mind from idea to idea. The aim of Socratic Dialectics is to move the mind from lower ideas and perceptions onto higher ones by disregarding hypotheses and replacing them with ultimate principles.

This method then gives us a new model or tool for creating better economic policies and systems. It is essential inSocial Fairtaxwhich will be more intuitive and fair than the current taxation system from Economics (which is merely based on the money-value of revenue). It will also help predict crises by warning policymakers if a class is becoming too strong in society as to render the other classes impotent or useless.

In her present condition, Great Britain resembles an unwholesome body with some overgrown vital parts. Her body is liable to many dangerous disorders which affect unproportioned bodies. Her blood vessel was artificially swelled beyond natural by the industry and commerce forced to circulate in it. A small stop in that great blood-vessel will very likely bring the most dangerous disorders on the whole political body.